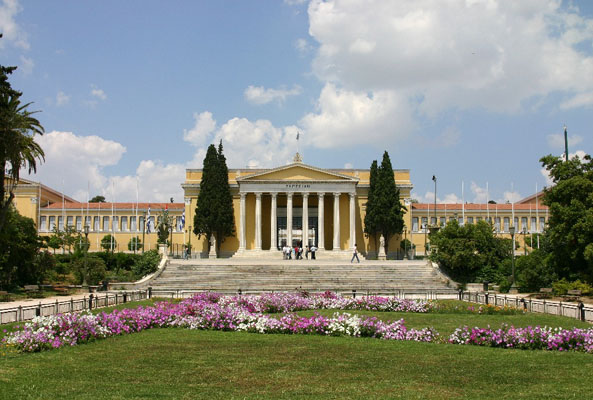 From May 17th to May 20th 2012, Athens (Greece) will host the 18th World Olympic Collectors Fair on the occasion of the lighting of London 2012 Olympic Flame.

The location of the fair will be the Zappeion Megaron (www.zappeion.gr), in the heart of the Greek capital.

An exhibition of Olympic memorabilia will be held at the same place. The theme will be "Greece and the Olympics: 1894-2012". This exhibition will be held from May 15th to May 20th.

Collectors from all around the world, please get in touch if you intend to come ....

The 18th World Olympic Collectors Fair will be hosted at Zappeion Megaron
( www.zappeion.gr ), a historical monument, the first building in the world to be constructed in order to serve Olympic needs and has always been linked to the Olympic Movement. Zappeion is located at the historical centre of Athens, surrounded by some of the most important buildings & monuments and within walking distance from the Panathenaic Stadium, where the Handing Over Ceremony will take place.

During the Fair, the Hellenic Post will also operate an office in Zappeion.

All participants will receive among other privileges, free accreditation passes compliments of H.O.C., to attend the Handing Over of the Olympic Flame Ceremony on May 17th at the Panathenaic Stadium. They may also visit Athens Olympic venues and historical sites. A limited number of free accreditation passes for VIP seating for the Lighting Ceremony of the Olympic Flame on 10th May in Olympia will also be available for few lucky participants with early bookings. They may also visit the premises of the Hellenic Olympic Committee in Ancient Olympia (International Olympic Academy).

As part of the Fair, a memorabilia Exhibition will also take place, from 15th to 20th May, where the Hellenic Olympic Committee, Institutions, as well as individual collectors will exhibit memorabilia and items related to Greece and the Olympic Games. 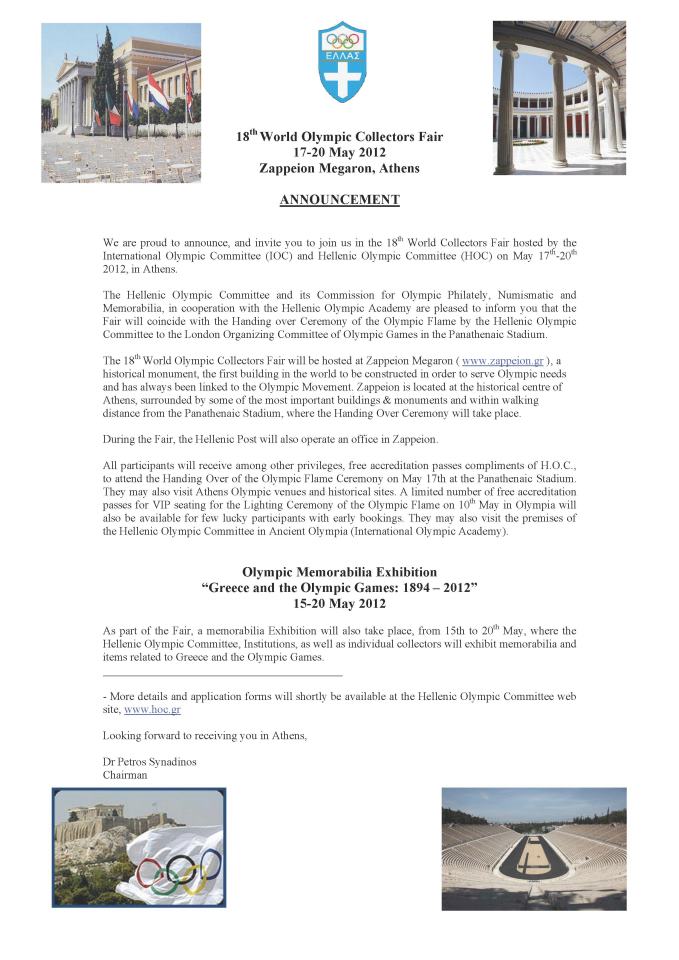 The official logo of the 18th World Olympic Collectors Fair, Athens 2012 has been released...

In addition the detailed program , and the registration's form have been published :

The 18th World Olympic Collectors Fair will take place in Athens from 17th to 22nd May 2012.

The AFCOS' team in in Athens for the London 2012 Olympic Flame Handover and the 18th World Olympic Collectors Fair !

You can discover the official pin here : https://afcos.forumactif.com/t535-athens-2012-18th-world-olympic-collectors-fair-official-pin


And here is some pics of the private flame ceremony at Acropolis...